Main
About the company
Our Awards

Every year, websites developed by our company take an active part in Internet contests and events. You can see all our awards on this page.

We got the 1st place in the nomination "Industry". 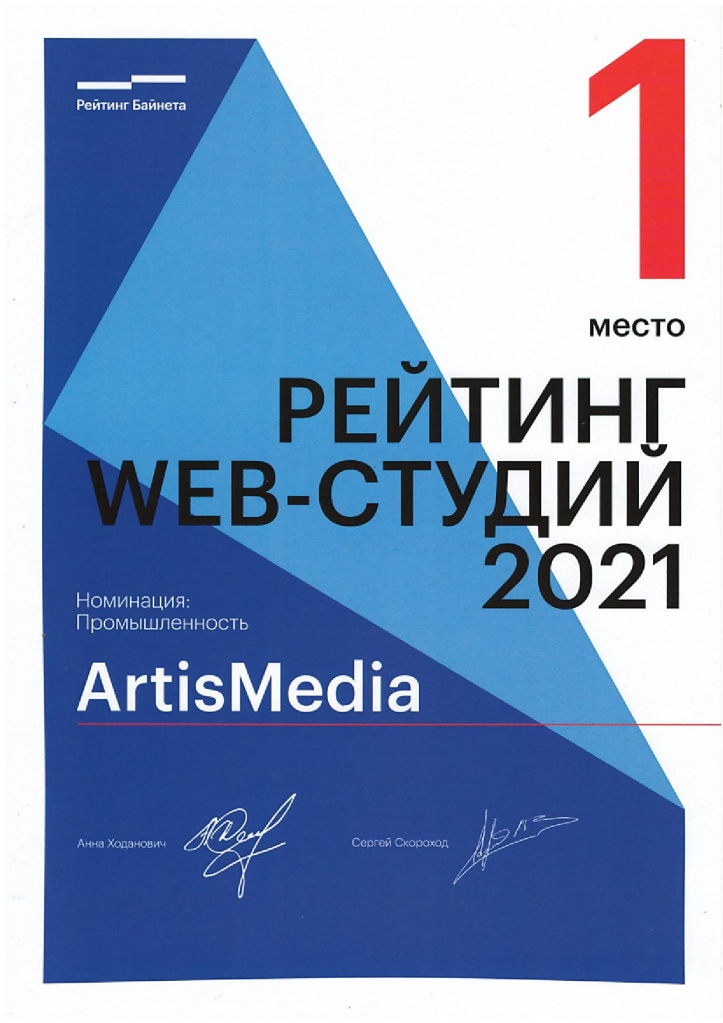 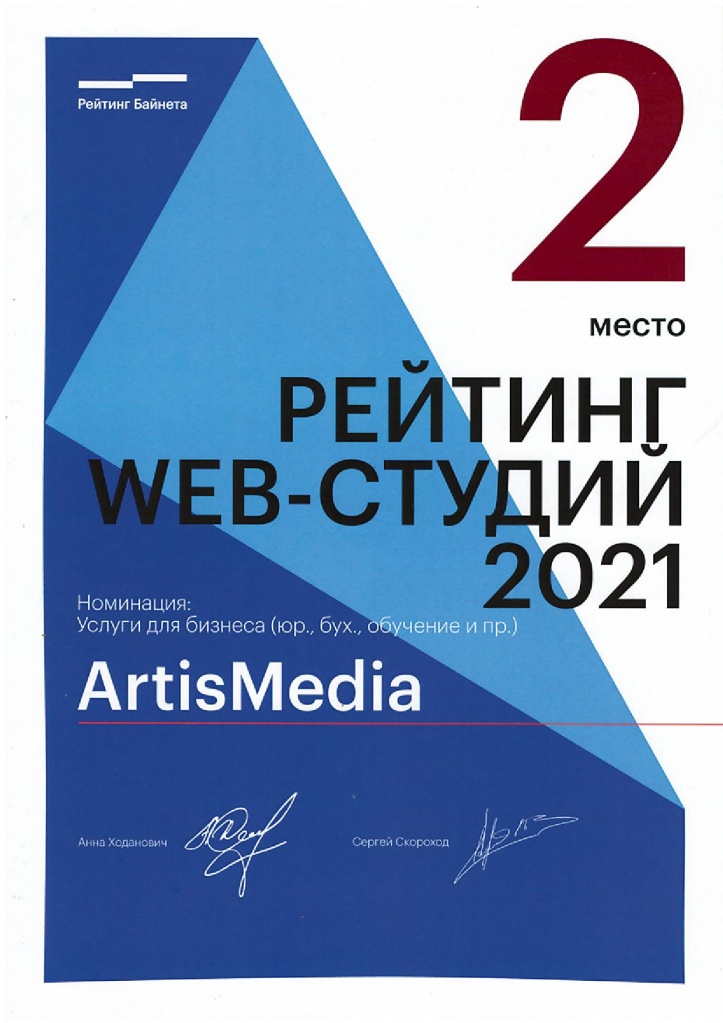 And 3rd place in the segment "Online stores /retail. 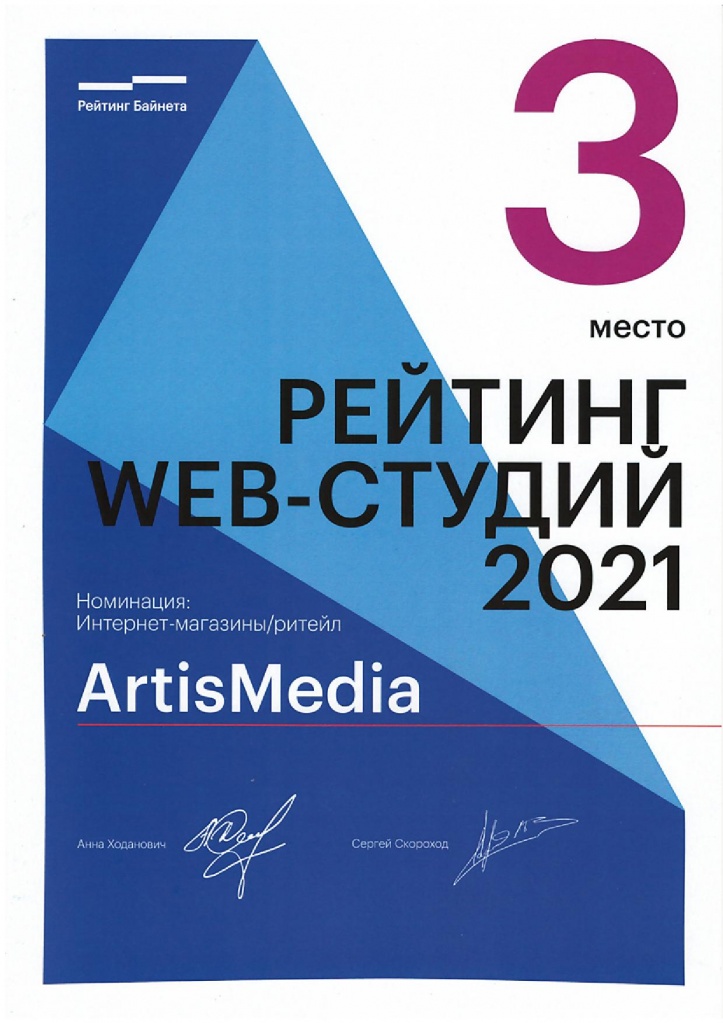 For 2 years in a row, we have occupied the 6th position among all website development studios. 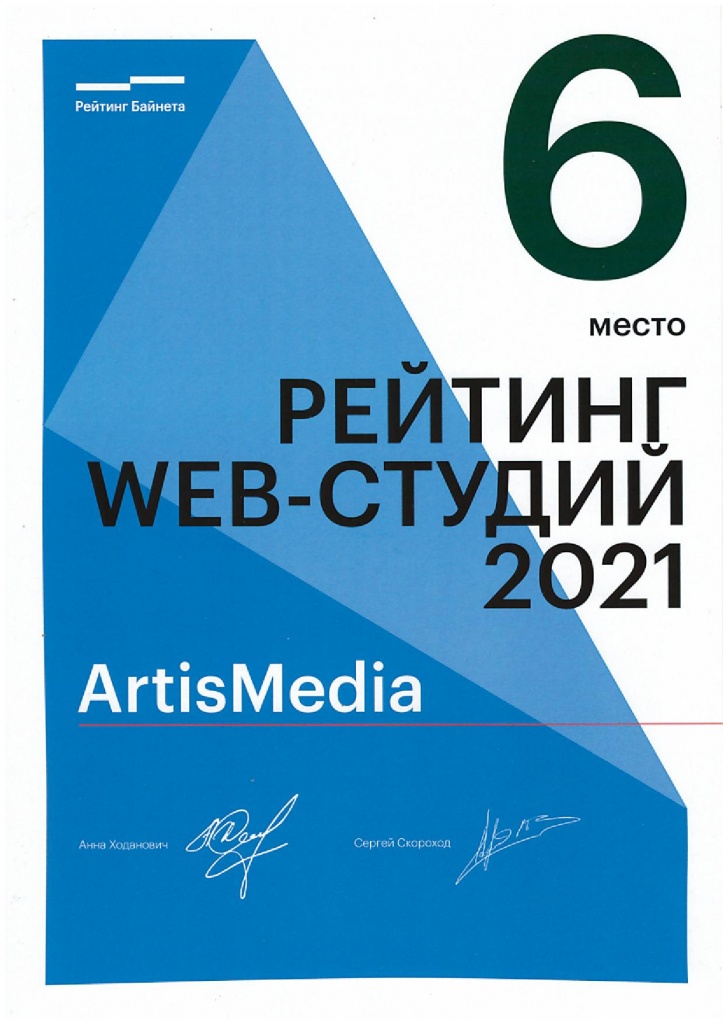 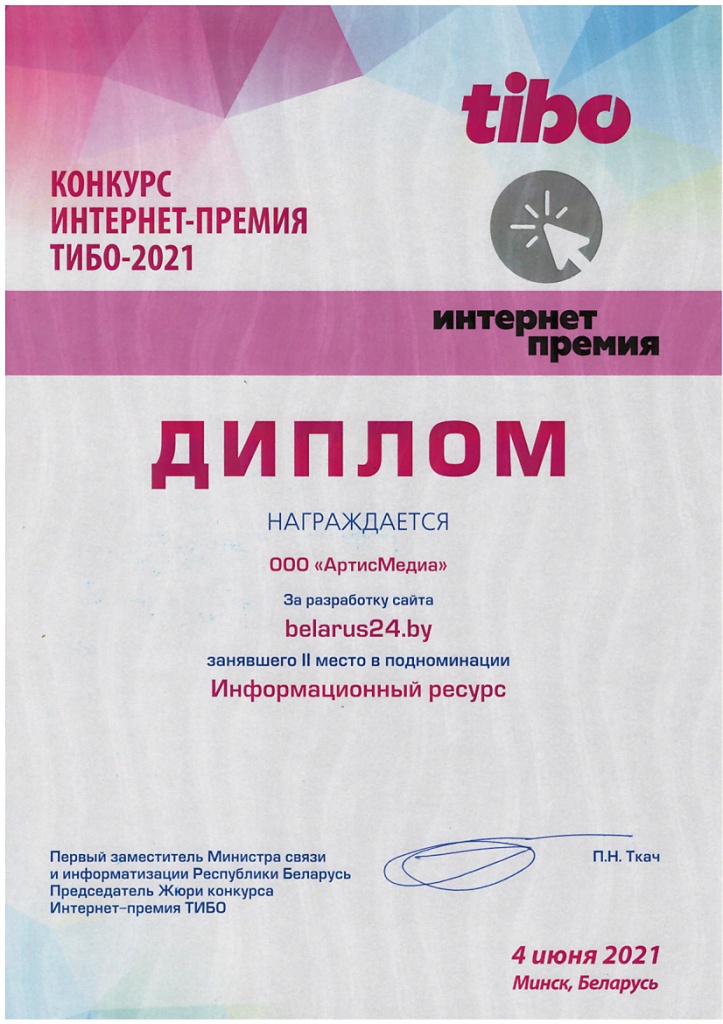 Another project with Belteleradiocompany took 3rd place in the nomination "Information Resource" - radio1.by. 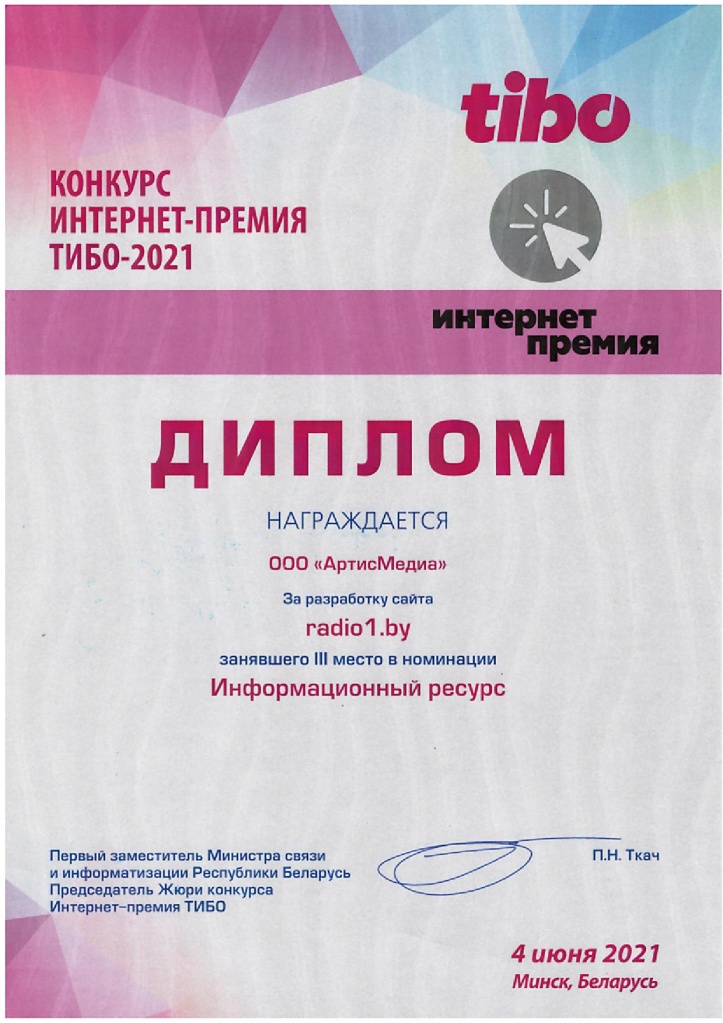 The 2nd place in the nomination "Sport" is taken by the website of the National Olympic Committee of the Republic of Belarus - noc.by. 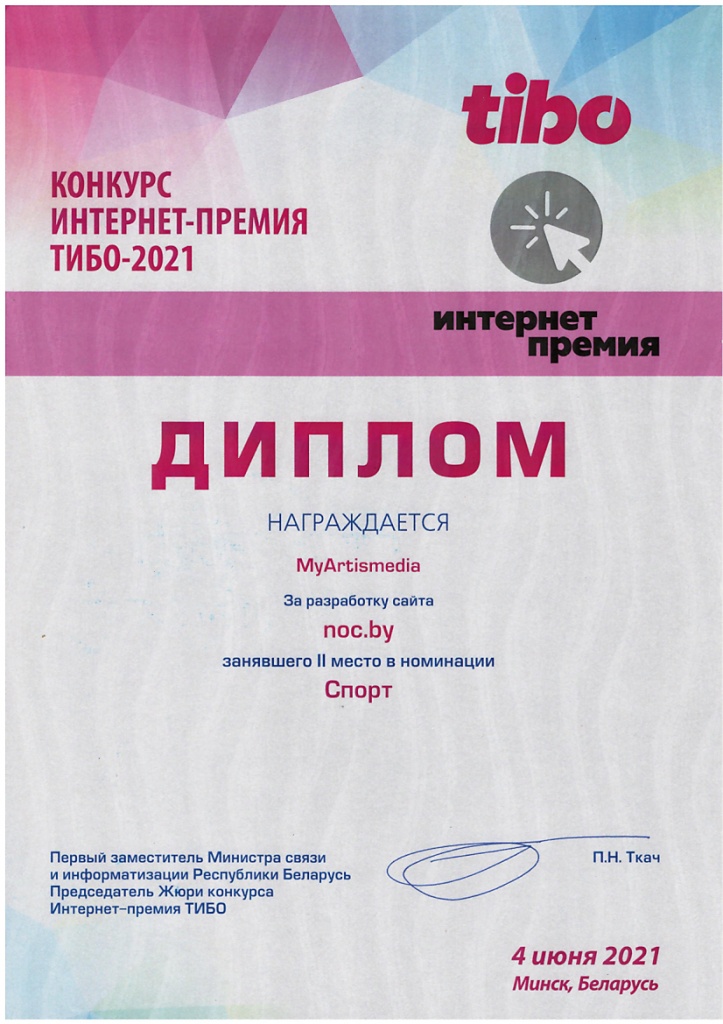 Every year we increase our positions in the overall ranking of Web studios in Belarus according to the Bynet rating.

The map.investinbelarus resource.by took the second place in the competition of sites in the nomination Portals.

"ArtisMedia" entered the TOP 10 of the Creativity Rating.

Our clients' websites became winners of the TIBO-2019 Internet Award

The website of the Belteleradiocompany took 1st place in the nomination "Information Resource". 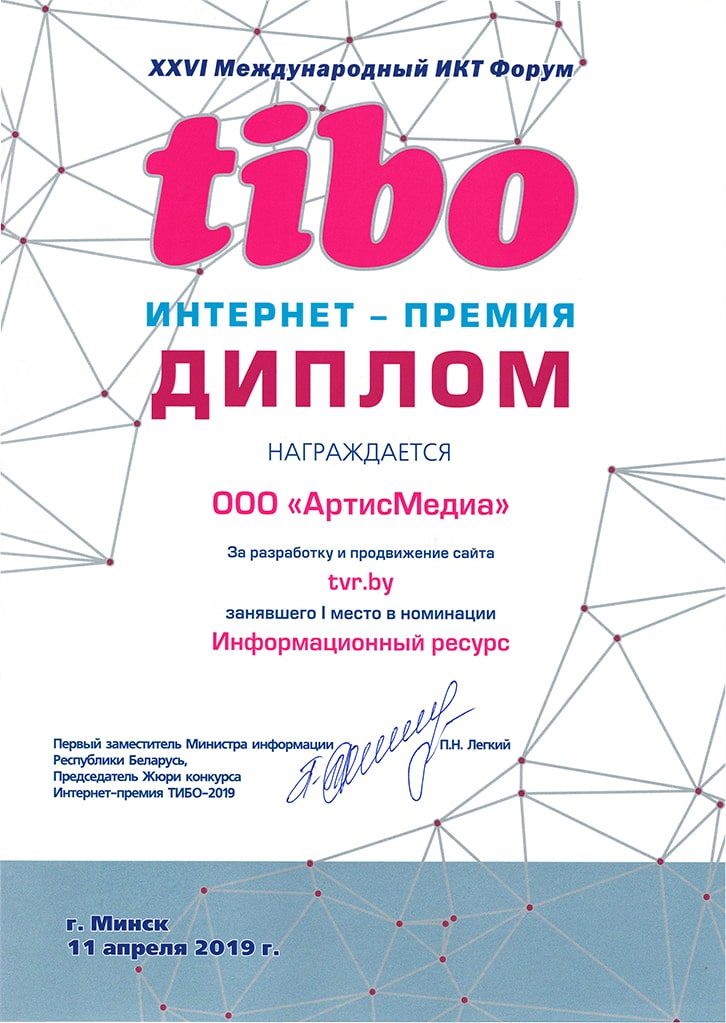 A special award from the jury members was received by the website of the Belarusian Research Institute of Transport "Transtechnika", which was presented in the "Transport and Logistics" sub-nomination. 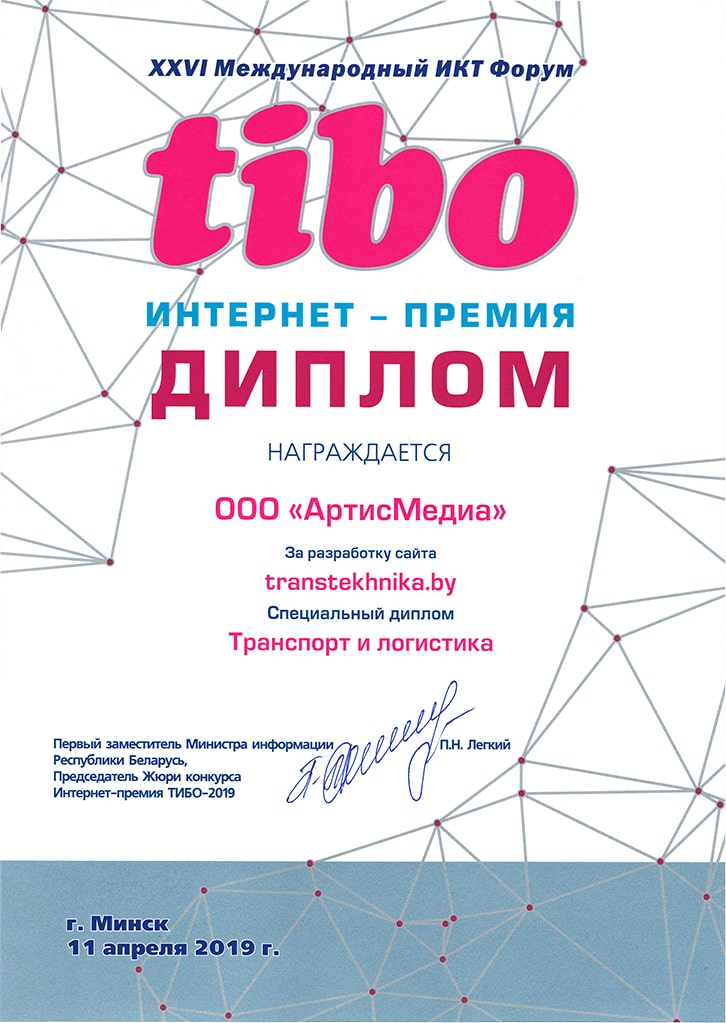 The website of the International satellite TV channel "Belarus24" won the 2nd place in the Information Resource nomination. 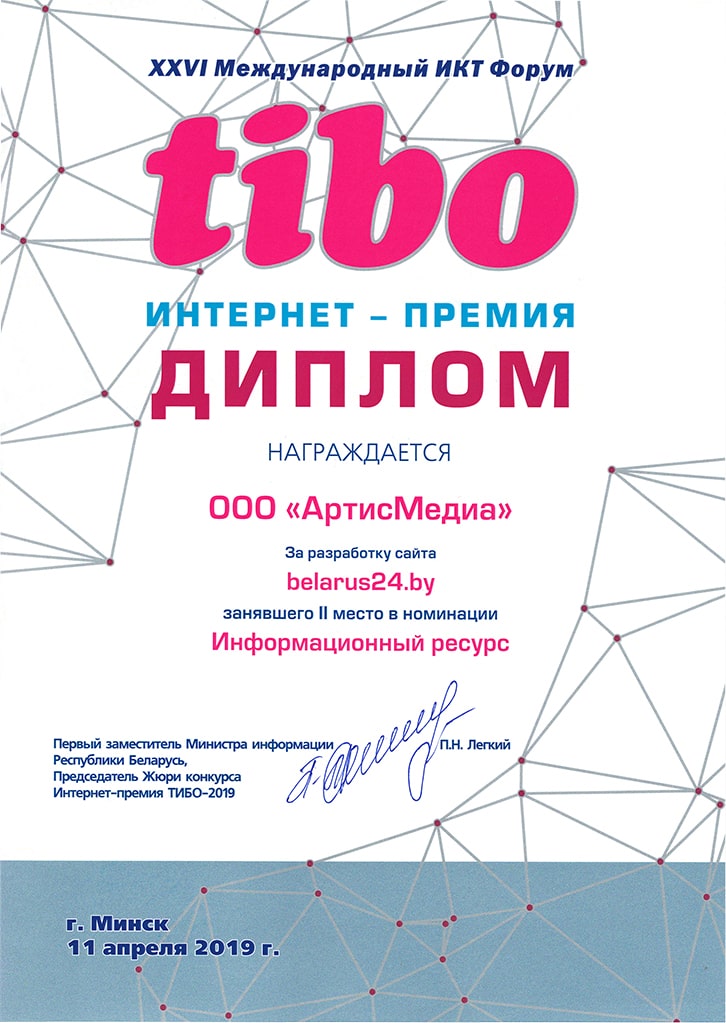 In the Sports category, the 3rd place was taken by the website of the Belarusian Biathlon Federation Cup. 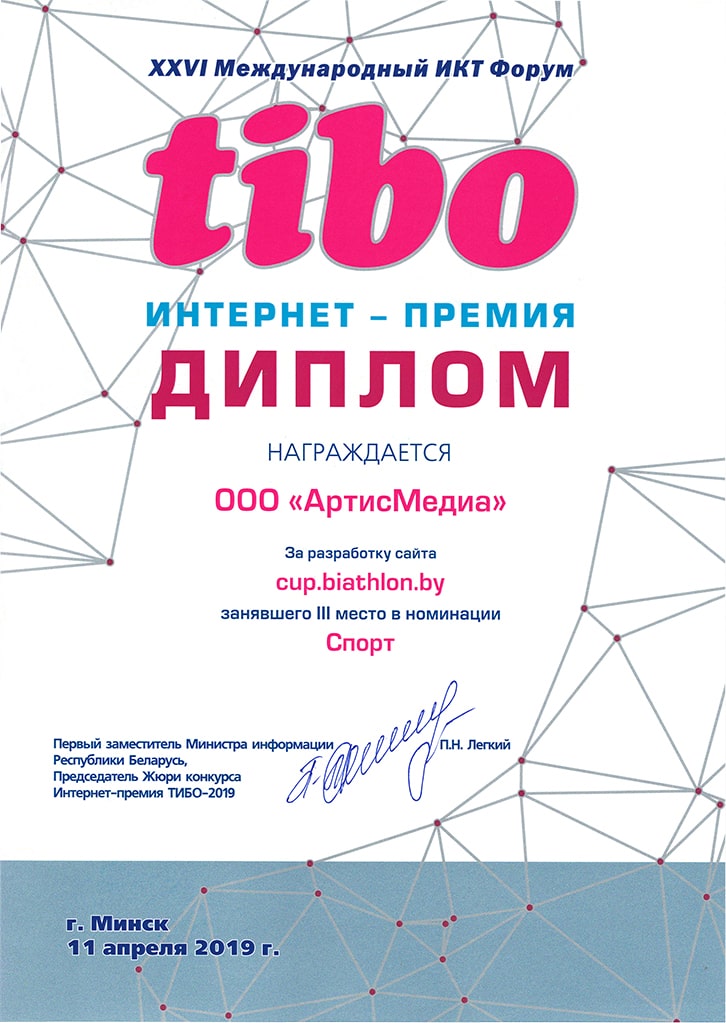 The website for the joint Belarusian-Russian company "Frost & K" became the owner of the 3rd place in the Business for Consumer (B2C) subdomination. 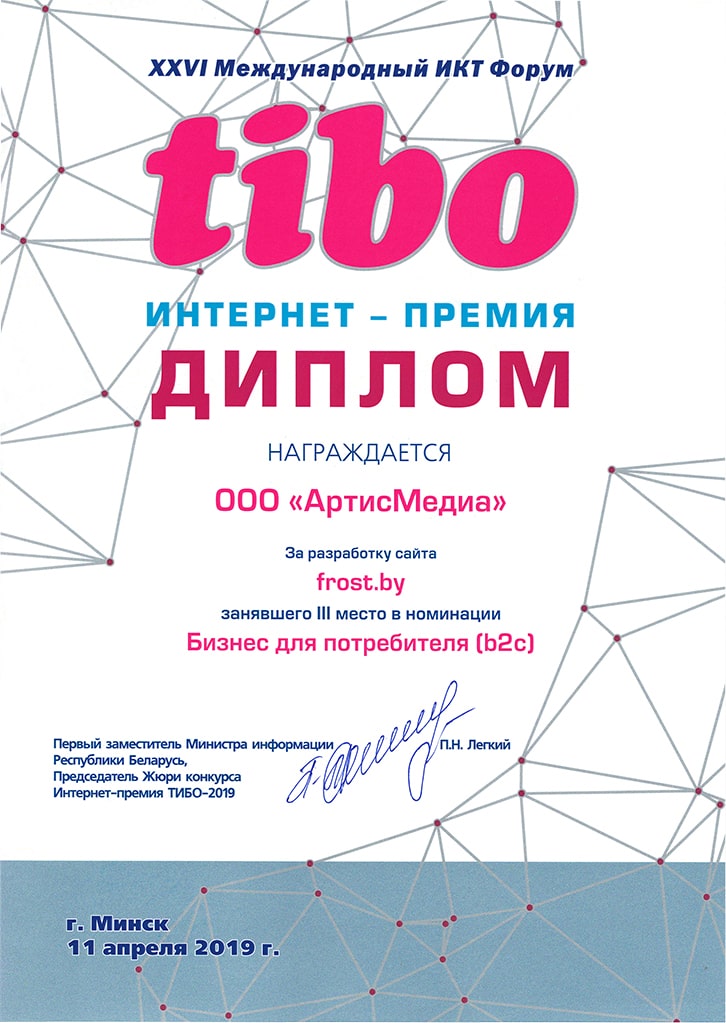 In 2018, our company became a business partner of Bitrix24

In 2018, our company received the Bitrix24 Business Partner certificate. From now on, we are implementing an online service and a boxed Bitrix24 solution.

And they became the fourth among the sales leaders! Ratings are based only on sales of 1C-Bitrix licenses and solutions from the Marketplace. 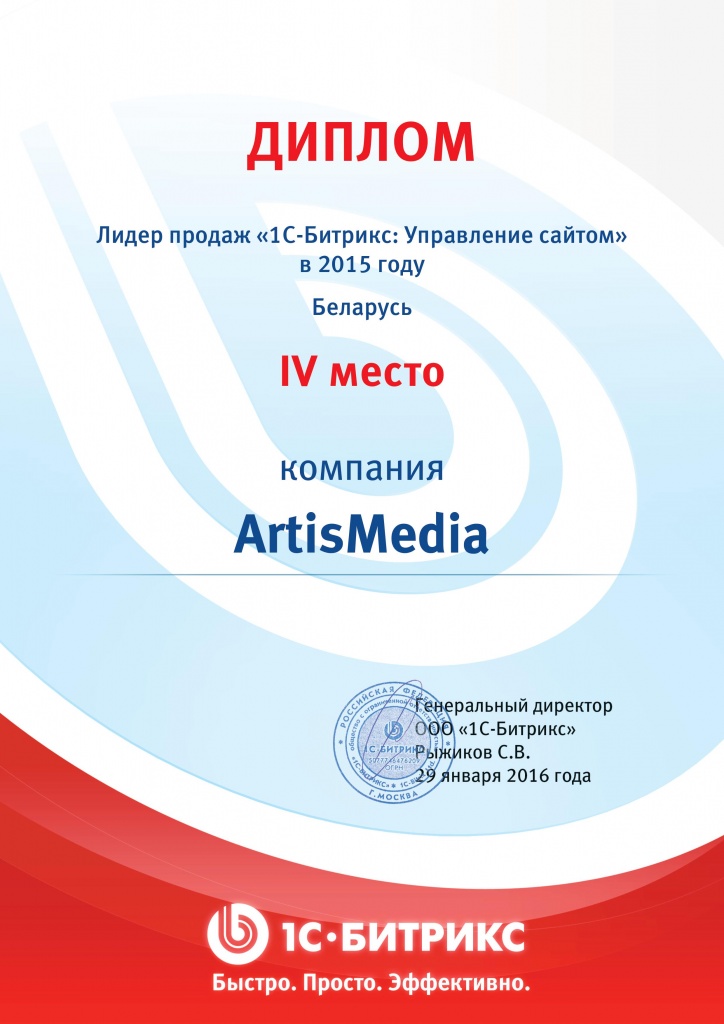 TIBO-2013 is the largest exhibition in Belarus dedicated to information, telecommunication and banking technologies. This year TIBO turns 20 years old.

The La Strada program has been working in the field of safe migration for more than 12 years. In 2012, the La Strada Program received almost 1,200 appeals from citizens regarding safe travel and stay abroad. The program "La Strada" took the lll place in the nomination Socially important project.

Website of the National Olympic Committee of the Republic of Belarus in the nomination "Ministries, departments, large state institutions."

Our company has developed a new website for the National Olympic Committee – www.noc.by . The visual part of the site is focused on the Olympic champions of sovereign Belarus, they are presented in flash animation where you can immediately read brief information about them, and by clicking on the link to read detailed information about each.

Promotion of the humane principles and ideas of UNESCO in the field of education, science, culture and communication through the formation of UNESCO clubs throughout Belarus.

We thank our customers for their trust and support! This decision was made by a professional jury announcing the results of the competition for the best Internet resource at the jubilee X contest "Internet Prize of the international specialized exhibition "TIBO-2012".

The new version of the website was developed in April-June 2011 jointly by the NGO "Belayu" and the developer company LLC "ArtisMedia". The uniqueness of the site is complemented by the addition of the Portal of distance e-learning of the NGO "Belayu" to it. The website is integrated with the main social networks in such a way that the user can independently post a page or news from the site that he likes on his blog or a page on a social network.

"It is important that public associations have not been ignored by the organizers of the competition. We believe in what we are doing and we want our Internet resource to become a real platform for promoting the ideas of peace, forming a healthy lifestyle, preserving the historical and cultural heritage of the Belarusian people," Dmitry Subtselny, Chairman of the NGO "Belayu", said at the ceremony of announcing the results of the Internet Award.

"We are very pleased that the concept of an interactive multifunctional website has found the support of the jury of the main competition of websites of our country. After all, the website of the NGO "Belayu" is not just a corporate website. In addition to information about the organization's activities, users can find information about Belarus and its culture, as well as take part in electronic distance learning. The site is integrated with social networks and blogs, so that users can spread the information they are interested in among their friends and acquaintances. It's great that ArtisMedia managed to implement all our ideas!" commented Vitaly Nikonovich, Editor of the website, Deputy Chairman «Belarusian Association of UNESCO Clubs».

In turn, we are very pleased that the website of the NGO "BelAY" - www.belau.info took first place at the contest of Internet resources "TIBO-2012" in the nomination "Internet resource of a public organization". We are very glad that thanks to fruitful and close cooperation, such an interesting and, of course, important social project has turned out! We believe in maintaining the established business and friendly relations and hope for further cooperation with Belarusian UNESCO clubs to achieve new heights!

Two websites of our company became prize-winners of the XI All-Russian open Internet contest "Golden Website". The jury of the competition consisted of 15 reputable experts, among whom were representatives of large IT corporations (Miscrosoft, Google, etc.).

The website of the Belarusian enterprise "Belryba" is the winner of the X All-Russian Internet contest "Golden website 2009" in the nomination "Enterprises and products of the Agro-industry". The site not only won the nomination and won the Golden Cybermaster award, but also received the Audience Award.

Golden Site is the first Russian Internet competition dedicated to evaluating the quality of web projects. It has been held since 1997 and contributes to improving the overall level of Internet development and its popularization.

Use the calculator and book a discount on your project. After submitting the form, our manager will contact you to apply the discount. The discount will be valid for three days, starting from the date of booking.

The discount amount changes every week and depends on the production load.
The discount applies only to the development of a new website.
Send a request